The White House roundtable last week has shone a spotlight on the countries job, skills and training needs for the 21st century workplace. With German Chancellor Angela Merkel and leading American and German industrial CEOs seated at the Cabinet table, President Donald Trump praised Germany’s long-term approach in using on apprenticeships programs to develop its workforce’ skills, declaring “The German apprenticeship model is one of the proven programs to developing a highly skilled workforce.  Germany has been amazing at this.” 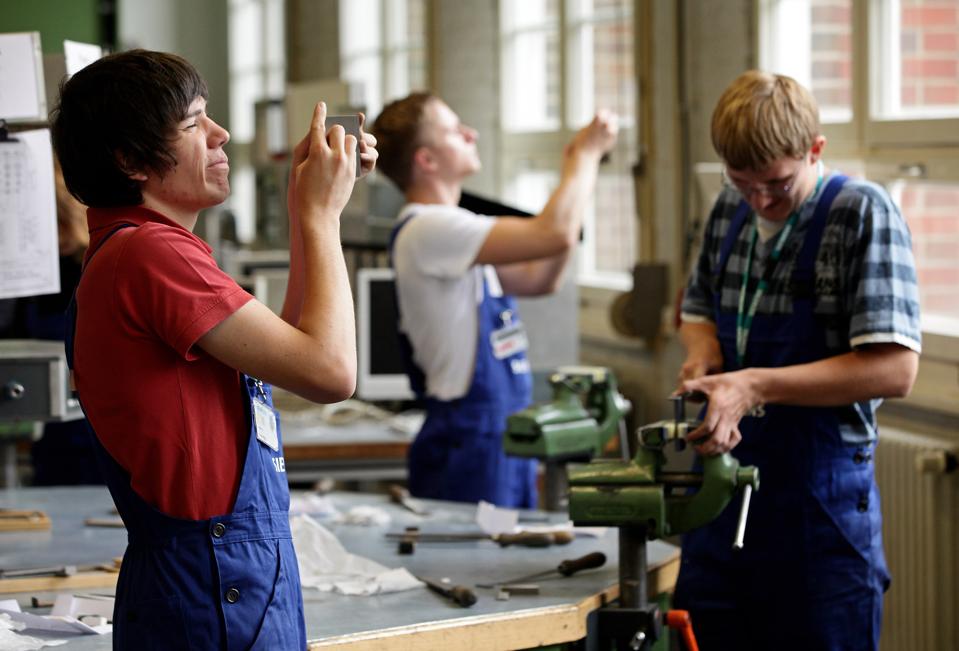 In Germany, vocational training is ingrained in the education culture. Apprentices learn the basics of precision filing at the Siemens training center, Berlin. (Photo by Sean Gallup/Getty Images)

The U.S., he stated, must embrace innovation in technical and vocational education and explore effective non-college approaches, like apprenticeships to prepare people for the trade, manufacturing and other well-paying careers of the future.

And its easy to understand why: Germany, despite having the highest wage costs in the world, has a significantly lower unemployment (4.2%) and youth unemployment (6.5%) rate than the U.S. (4.9% and 9.9%) or any other comparable country. It also has a an export economy focused high-value manufacturing: last last year Germany lodged a record trade current account deficit of U.S. $297 billion – nearly 8.5% of GDP – and runs strong budget surpluses.

As these enviable economic outcomes are substantively underpinned by Germany’s commitment to wide and varied apprenticeship training pathways, it was no surprise to hear CEO after CEO outline how their firm’s approaches to expanding vocational pathways and call for the expansion of apprenticeship programs in the U.S.

Marc Benioff, chairman and CEO of Salesforce, even encouraged the president to “ take a moonshot goal to create five million apprenticeships in the next five years .”

The president’s response “let’s do that, let’s go for that five million” was mightily encouraging to apprenticeship advocates across the nation.

A target of five million apprenticeships, may seem a significant stretch as the U.S. currently has just on 500,000 active apprentice positions, however, a unified approach to expanding this mode of training would not also generate improved economic and employment conditions for our citizens, but also put a big dent into several related social and budgetary problems, for example:

• Closing the “skills gap” that is acting as a handbrake on business investment in capacity expansion in the U.S. A shortage of skilled job candidates regularly tops of list of CEO complaints.

• High youth joblessness and underemployment. Millions are unemployed or stuck in low-wage, temporary jobs, with little hope of moving up. Apprenticeships will help people avoid a range of poverty and welfare traps.

• Stagnant wages. Wages stagnate when productivity fails to grow. Apprenticeships turn out workers trained to the cutting edge of industry, to ensure maximum productivity. (Most newly minted apprentices pull down starting pay from $45,000 to $60,000, out-earning the majority of their bachelor degree peers).

Yet despite knowledge of the benefits and superior outcomes generated by German and other European vocational training systems, only  a small percentage of U.S. high school graduates enter apprenticeships, compared to their counterparts in some high-income EU countries.

Why is that? Blame could be reasonably apportioned onto many heads: high schools that have eliminated vocation education; some counselors and parents who think that the only pathway to a successful and rewarding career runs through a four-year college degree; and a job snobbery, where many in society look down their nose at careers that involve making or fixing things. On the front line, its more a chicken-egg problem. There are far too few apprenticeship offers from companies for many schools and counselors to pay much attention.